Review: Bastard Out of Carolina by Dorothy Allison

Dorothy Allison’s Bastard Out of Carolina tells the story of Bone Boatwright, a little girl growing up in Greenville, South Carolina. She’s poor as dirt, surrounded by women that love her and family suffering under poverty and the shame instilled by poverty. 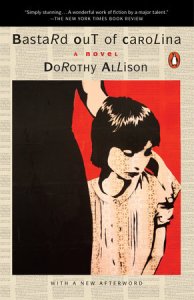 The novel opens with Bone’s birth, which is a semi-autobiographical account of Allison’s birth. Her mother was in a car wreck only days before she was due, and woke up in the hospital three days later with a new baby. She went back to work eight days after giving birth, with a daughter “certified a bastard by the by the state of South Carolina” (3). Each year, Bone’s mother returns to the courthouse to get a new birth certificate without the illegitimate stamp. Each year she’s denied until that courthouse burns to the ground.

Allison’s novel works within the confines of Southern poverty, which affirms some stereotypes of the rural poor, but also vehemently refutes how people living in poverty actually function. Her mother, aunts, grandmother, and some of her uncles are loving, hardworking, fiercely loyal people. But Allison doesn’t shy away from showing how poverty—the explicitly Southern kind—forces a person to turn into something violent.

Dorothy Allison is beyond eloquent in interviews. Her voice is only vaguely Southern, although I know a thing or two about turning an accent off when I’m trying to sound intelligent. In a 1995 New York Times article, she describes herself as a “cross-eyed, working-class lesbian addicted to violence, language and hope.” Her novel never abandons her characters. They’re family, and they aren’t waste people to be left behind. In one interview, Allison describes poverty with:

“I’m surprised that I didn’t manage to destroy myself…from the hatefulness, out of the self-hatefulness that’s engendered by poverty. And that’s a big way to say they teach you to despise yourself […] In the Baptist South, poverty is a sign you did something wrong…there’s something wrong with you. You was wrong from birth, there’s a reason that you’re poor.”

Critics have paid attention to how Allison’s characters experience shame rooted in poverty, such a J. Brooks Bouson’s analysis of “White Trash Shame” in the novel. She cites Bone’s birth certificate stamp that deems her “illegitimate,” and outlines the various ways that shame both predestines white trash characters to lash out and underline the process of social and familial stagnation. Even Bone’s stepfather, a man that would seem impossible to defend, always lashes out on Bone when he can’t keep a job or feels like a failure to his paternal family. Daddy Glen is a despicable, evil, and cruel human being. He’s sick from his attraction to his stepdaughter, frustrated by his failures as a husband and a man, and lashes out to his stepdaughter in much of the frustration that poverty brings. He is indefensible. But he is also, at points, a victim of cyclical poverty that both breeds powerlessness and toxic masculinity.

In the middle of the novel, Bone has a spiritual awakening and “gets religion” as her family says. She dreams of being a gospel singer, repeating “Lord, make me drunk on that music.” Bone clings to gospel music and finding religion, much as the other girls in her family, primarily to deal with the shame of sexual and physical abuse as well as poverty. She apologizes to Jesus, wondering how God could stand her, and then says, “The music was a river trying to wash me clean” (136). She wants to be a gospel singer to be loved by the world, but she also internalizes the “dirtiness” of being white trash. She knows she’s a bastard, a dysgenic and dirty outsider that is abused by someone who is supposed to love and protect her and clings to religion and gospel music as a symbolic baptism. Instead of washing away her sins, the prospect of being a gospel singer washes away the dirtiness of poverty, offering both spiritual redemption and a way out of her impoverished landscape. The ability to sing for the lord would make her good enough.

I was particularly struck by several passages in chapter fourteen. After talking to her mother about how ashamed she is of her school clothes compared to the other girls at school, Bone reflects on the idea of beauty and the women in her family. She talks to Aunt Raylene, who makes awful jokes about poor women’s bodies—she comments, “we were all poor women’s stock, descendants of women who used to deliver babies in the fields and stagger up to work just after. Gawky, strong, ugly” (206). She acknowledges that poor women’s bodies are “born to be worked to death, used up, and thrown away” (206). If you read the text as a bildungsroman of a poor little girl, this discussion of women’s bodies marks a pivotal shift in Bone’s initiation. She comes to understand the shame and death associated with being poor, much like Allison’s remarks that poverty makes you mean because you have to get mean to survive. Bone’s acknowledgment of the poor women’s bodies is one of the first moments where she gets firmly, truly mean.

This book is not meant for anyone who wants a “noble” depiction of working-class strife or a sweet pastoral from the dark region of the South. This book is never truer than when Allison’s descriptions of poverty leave the reader with a gaping mouth and heavy heart. Early in the novel, Bone delves deep into the nature of hunger in passages that make your insides ache from her hunger. Bone’s encounters with sexual violence and rape make multiple moments in the text read as a horror novel. But Bone’s childlike and hopeful voice never abandons the reader, her family, or the South. She isn’t left alone to suffer the trauma of rape, despite the overwhelming feeling of abandonment by her mother. Her aunts and uncles deeply love her and try to help her make sense of her suffering without pretending as if it didn’t happen.

Throughout the text, Allison draws on country music women like Kitty Wells and Patsy Cline, the latter who said, “it wasn’t God who made honky-tonk angels” (305). The women lay the foundation for Bone’s initiation or bildungsroman-esque journey into adulthood. Except that knowledge isn’t maturity or realism—it’s grief. Bone is initiated into adulthood when she learns grief and is given the “look” of a Boatwright woman that is only gained through loss.

The last chapter of the book will hurt your soul. They made a movie out of the novel that I haven’t seen yet, which appears to be a realistic portrayal of the South Carolina Boatwrights. If you haven’t read Bastard Out of Carolina, I highly recommend picking it up but don’t believe you’ll get out of it without a heavy heart and a broken, hopeful soul.

Let me know what you think! You can comment below or email me at snakeandtree@gmail.com, or be a little bitch and not say a word. If you haven’t read this book or movie I highly recommend it, and I don’t think I gave any spoilers away. Next week I think I might post something about Faulkner or politics–let me know if you have a preference. Peace and blessings.

3 replies on “Review: Bastard Out of Carolina by Dorothy Allison”

The title “Snake and Tree” comes from the Alabama proverb that if you hang a dead snake in a tree it’ll bring rain. These stories are the snake. The rain is making peace with this broke South.