Some of this is even true.

When I ask my family for ghost stories I usually get the big ones. Maybe that haunted railroad bridge in Florence, Alabama where people take engagement photos, or Mrs. Winston’s antebellum home in Tuscumbia, where my daddy heard classical piano music playing in an empty, locked house. Maybe Sloss Furnace in Birmingham, or the ghost of Highway 5 in Winston County. Rarely do I get a story so emotionally conciliatory as Aunt Jenny Johnson.

What you need to know about Winston County, Alabama, and me, I guess, is that the Civil War was complicated. The surrounding area of Double Springs has always been poor and very, very white. Double Springs was 97% white people in 2010. That being said, the Civil War ignited a lot of animosity from the county—so much so that around 1863 the county attempted to secede from the Confederacy and become “The Free State of Winston.” They saw the war about slavery as a rich man’s war and a poor man’s fight. Most white men in Alabama didn’t own slaves, and that isn’t a moral charge. They probably wanted to, but they were poor as hell. I’m not saying they weren’t a bunch of racist white people, or that they stood up against the Confederacy on abolitionist principal. But I can say that they were seemingly vehemently opposed to the Civil War, and knew they didn’t want to take part in it because slavery was a system that kept non-landowning white people unquestionably poor as dirt and socially immobile. Nonetheless, you brought Yankee trash near their homes, they just as well picked up a gun. 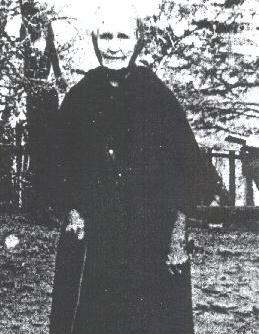 The Confederate Home Guard was a loosely constructed militia group that worked in both defense and home front operations for the Confederacy, largely responsible for reprimanding deserters from 1861-1865. It had a loose rank structure and only a few certain, unenforced regulations. The Home Guard knocked on Jenny’s door in 1864, and both Willis Brooks and his eldest son, John Brooks, were either hung or shot and killed in their yard.

That’s the most probable portrait of what happened to spark the blood oath ghost tale, but there is a second version. According to the Moulton Advisor, which printed this story in 1924, Willis Brooks was actually a tenured soldier. He allegedly fought in the Mexican War and attempted to enlist in the Confederate army, not taking up arms until the war came to North Alabama. Upon returning home, Brooks found out his wife had been harassed by a man, which started the Brooks-McFarland feud. This story seems anachronistic and, ‘scuse my French, revisionist bullshit. Willis Brooks Jr. was involved in the Brooks-McFarland feud, but it seems more likely that Willis Brooks died in 1864 for his son’s refusal to fight, or their refusal to be “taxed-in-kind” or to donate crops to the Confederacy.

So what did Jenny Brooks do? Naturally, she made her children sign blood oaths that the eight men responsible for her son and husband’s deaths would be avenged. Most writers portray the Brooks family as an outlaw gang. That might’ve become true with her son Willis Brooks Jr., but it seems much more probable that the family was a quiet group of backwoods folk that partook in backwoods justice. Aunt Jenny’s home and outbuildings were destroyed by fire, and, after the deaths, it is safe to say that much of her family and dependents took up some bad, gun and ass-whooping related trouble. Gainam Brooks and Mack both eventually died from a family feud with the “black Hubbards,” or the black family that descended from the slaves of the white, land-holding Hubbards.

Jenny Brooks brought the eight remaining children around her dead husband and son and had them wash their hands in the blood, swearing they wouldn’t bury their mother until all eight men were dead. Jenny and Mack killed the first member of the Home Guard by shooting the man from his horse, dragging his body into the woods to saw off his head and bring it home in a sack. She boiled and scrubbed it until she had a clean skull, and made either an ash tray or soap dish from the cranium.

Her sons became expert killers. It’s claimed that she said she wasted “many a keg of powder” teaching her boys to become expert shots. Seven of those Home Guard Confederates did find themselves dead, along with a dozen or so of their family and friends, while one disappeared off the face of the planet after realizing he was hunted. Jenny outlived all of her children, becoming a beacon of the community—a good Christian, church-going woman at the Macedonia Missionary Baptist Church. She wouldn’t let a Republican politician run without him visiting her home to get her approval, and she was extremely charitable and took care of her children and grandchildren. But as the story goes, on her death bed, Jenny asked the pastor if she could wash her hands before she went to meet the Lord, so they brought her the soap dish she made from the skull of the murdering scum that took her husband, and she closed her eyes and passed on.

If you go out to Bankhead near her home at night, it’s told you might see a green light bouncing through the trees. Or some say that if you’re driving on that pebbled road, Jenny might join you in the car. If you get too close to the ruins of her land, you might hear her whisper to get out or you’ll be next. Either way, leave a penny at her grave in Winston County on your way to the trailhead, but don’t go looking for her out on Byler Road.

Sources came from here, here, and here, as well as some old ass Winston and Lawrence County census records.

Got some kind of disturbed story you’ve heard and want me to research for shits and giggles? Email me at snakeandtree@gmail.com. Like, comment, and subscribe and all that jazz. You can be mean, too. Next week I’ll probably post a review of Hillbilly Elegy by J.D. Vance, so start reading now. Love y’all, have a good week.

One thought on “Mama’s Blood Oath”

The title “Snake and Tree” comes from the Alabama proverb that if you hang a dead snake in a tree it’ll bring rain. These stories are the snake. The rain is making peace with this broke South.